I have a confession to make.

When I was a wee babe, I ate books. Yes, I did. I ate them. They were right there. They smelled quite nice. And I found that they tasted pretty good. 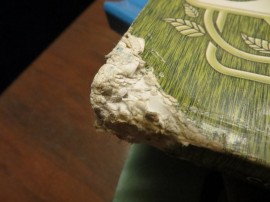 But the Mom Person moved them out of my reach and I soon found other, better things to chew on and eat. Now, in my maturity, I enjoy books because they bring me closer to the people that I love. They bring me soft hands and soothing voices. Sometimes giggles and laughter. And sometimes I learn a thing or two.

A book that was recently read to me and brought those peals of JOY and laughter is another one by that wonder boy, Oliver Jeffers. The Incredible Book Eating Boy. It was published by Philomel Books in 2006. It is suitable for all ages. It is hilarious!

I am a HUGE Oliver Jeffers fan! His books are incredibly unique. This story is about Henry, a boy who LOVES books! But, he loves to EAT them! He loves to eat all sorts of books. And he finds that the more he eats — the smarter he gets! And he wants to be smart, so he eats and eats. But then he finds that he is feeling very ill indeed! And all the books that he was ingesting start getting all mixed up. In his tummy and in his head. Everyone tells him he should stop eating books. So he decides that he must. Then one day he picks up a book and instead of eating it, he opens it and reads it. And, lo and behold!, he discovers that he loves to READ! 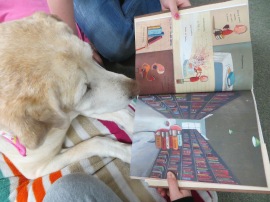 The story is a fun one, but the book itself is a real treasure. There is a big piece of the back of the book that has been bitten off! ( I did not do it!) The kids thought that was pretty funny. But the really clever thing is that the illustrations and text are printed on copies of real book pages from found books. Mr Jeffers has said that he used pieces of paper that he got from trash bins! Who would think to do such a thing!?

The kids that read this book to me gave it a very high 5. and I give it 4 big paws up. You must check it out!
This book lends itself to a discussion of the proper care and use of books. Some resources can be found here and here.
And here is a pdf file for a bookmark with rules on it!

Now you might want to head over to Susanna Hill’s blog — It’s Perfect Picture Book Friday! and there will be lots of great books and resources for you to check out!

35 thoughts on “I have a confession to make”